You are here: Home / Hiragana / How to Write Japanese Hiragana N Group – なにぬねの

Konnichiwa! Today we are going to learn how to write Japanese Hiragana N Group – な、に、ぬ、ね、の.

I recommend you to master Hiragana according to the Hiragana chart. Be sure that you went over the letters for vowels, K, S, T groups before starting today’s lesson. 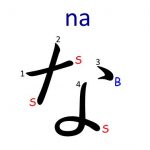 Be careful not to make stroke #2 too long. It doesn’t reach the bottom line. Keep the loop at the end of stroke #4 rather flat like an almond laying on the floor.

The pronunciation of な is similar to the sound of [na] in “nap” but the vowel is more like [a] as in “ah.” 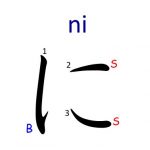 The first stroke is slightly curved and has a brush-up at the tip.

Stroke #2 and #3 together look like the Hiragana letter KO こ. Be sure to nicely place the KO between the beginning and ending points of the first stroke.

The pronunciation of に is similar to the sound of “knee” in English but the vowel is shorter. 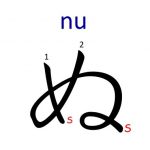 This is one of the letters that my students have a hard time mastering.

The first trick to making ぬ look right is to begin stroke #2 a little higher than stroke #1. The second trick is to place the loop at the end of stroke #2 nicely around the bottom line of this letter, which is marked by the ending of stroke #1. Do not let the loop drop way below the line.

The pronunciation of ぬ is similar to the first syllable of “noodle” but the vowel sound is shorter. 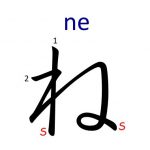 Later you will learn RE れ and WA わ, and they all resemble ね except for the ending of stroke #2. To write all the three letters correctly, first and foremost you must place stroke #1 toward the left, not in the center. Another thing is that stroke #2 needs to start coming down diagonally right after it slightly crossed stroke #1. Do not let it go beyond #1 too much.

Be sure to place the loop on or a little above the bottom line, which is marked by the ending of stroke #1. Do not let it drop below the bottom line.

The pronunciation is similar to the sound of [ne] in “net.” 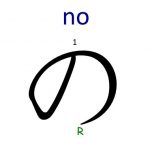 の has one stroke only.

This letter looks like the “NO” signs that you see in some places as “No Smoking” or “Do Not Enter” so it should be rather easy for you to remember its shape. Just like the “NO” signs, the first part of the stroke comes down diagonally, not straight.

The pronunciation is similar to the sound of [no] as in “No” in English, but the vowel is shorter and the lips are not as rounded when you pronounce Japanese の.

Can You Read These Words?

I hope this lesson helped you learn how to write Japanese Hiragana na, ni, nu, ne, no なにぬねの.

Can you believe that you have already learned 41 Hiragana letters including voiced sounds of [G], [Z], and [D]?  Great job! Give yourself a pat on your back!

At this stage, you should be able to read quite a few Japanese words in Hiragana. Can you read the following words? Test yourself, and I’ll give you the answers at the end of this post.

A Hiragana chart and practice sheets are available for your self-study. If you haven’t downloaded them yet, provide your name (nickname is fine) and email address. I will send them right out to you!

Feel free to leave any comment or questions below.