You are here: Home / Hiragana / How to Write Japanese Hiragana – あいうえお & ん

Konnichiwa! Today we are going to learn how to write Japanese Hiragana あ、い、う、え、お and ん.

Here is the video instruction for this lesson. You can watch it by clicking the video below. It will walk you through how to write each Hiragana letter accurately and beautifully.

あ has three strokes and make sure to give the third one enough width. It has to be wider than the first stroke.

The pronunciation is similar to [ah] but is a little shorter. 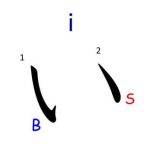 い has two strokes. Both are slightly diagonal inclining towards left. The second stroke is shorter than the first. Make sure the tip of stroke #1 is brushed up.

The pronunciation is similar to the vowel sound in “each” in English but is shorter. 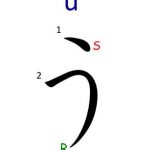 う has two strokes. It is crucial to place both strokes in aligned with the center line, like you see in the video. Be sure that stroke #1 is NOT touching stroke #2.

The pronunciation is similar to the vowel sound in [ooh] in English but is a little shorter and the lips are not as rounded. 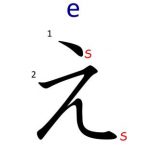 え has two strokes, just like う, with the second stroke a lot longer and sharper, with an abrupt stop at the end instead of a soft release. Like う, it is important to align both strokes and not let them touch each other.

The pronunciation is similar to the first vowel sound in “exercise” but the mouth is not opened as widely. 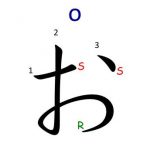 お has three strokes. The trick to writing this hiragana beautifully is NOT to place the very first stroke in the center. Begin placing stroke #1 slightly on the left as explained in the video. When the second stroke hits the bottom, try not to give too sharp angle as you come back up and around, leaving adequate space between the curvature of the 2nd and 3rd stroke.

The pronunciation is similar to the vowel sound [o] in the word “bow” as in English. 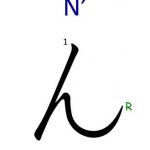 ん is written in one stroke. It looks like a lower case cursive version of  “h” in English alphabet but you leave more space between the base of the letter. Please refer to the video above.

ん is the only consonant in Japanese that is pronounceable without a vowel accompany it.

I hope this lesson helped you learn how to write Japanese Hiragana あいうえお and ん.

I am often asked by my students what is the best way of mastering Hiragana letters. The truth is, there is no magic wand that enables you to suddenly know all of these letters.

The only way for you to remember Japanese letters is to keep practicing with your own hand.

Writing each letter every day until your hand remembers how to write it. That is how we native speakers learned how to write. I remember I submit my Hiragana practice notebook every single day to my sensei for the first one year in school. I am pretty sure that’s what you did to learn the letters for your own language when you were little.

A daily effort of practicing is indispensable to master Japanese letters. If you need a practice sheet, provide your name (nickname is fine) and email address. I will send them to you.

Feel free to leave a comment or questions below.