In English, word order determines the major part of the sentence. For instance, in the sentence, Chris called Melissa, if you switch the locations of Chris and Melissa the meaning of the sentence changes, right?  That’s not the case in Japanese.

Then, what is the main factor in Japanese sentences? Let’s find out in this video lesson. (12 minutes)

You can join the mini-course I mentioned in the video by clicking the button below. The course comes with a list of 134 Japanese verbs!

It’s All About Particles

The word order doesn’t matter much in Japanese sentence structure, but Particles do. 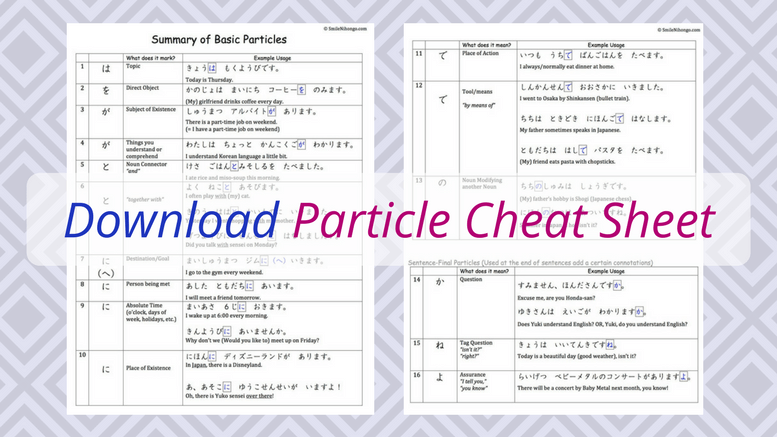 Do you want the basic Japanese Particles all in one place? I have the Particle Cheat Sheet (PDF, 2 pages). Just let me know where I should send it!

Now, take a look at the Japanese sentence, watashi wa sakana o tabemasu. We determine that the word sakana (fish) is the Object not because of its location in the sentence. What determines it then? The Particle. The word is accompanied by the Particle O, which marks Direct Object in the sentence. 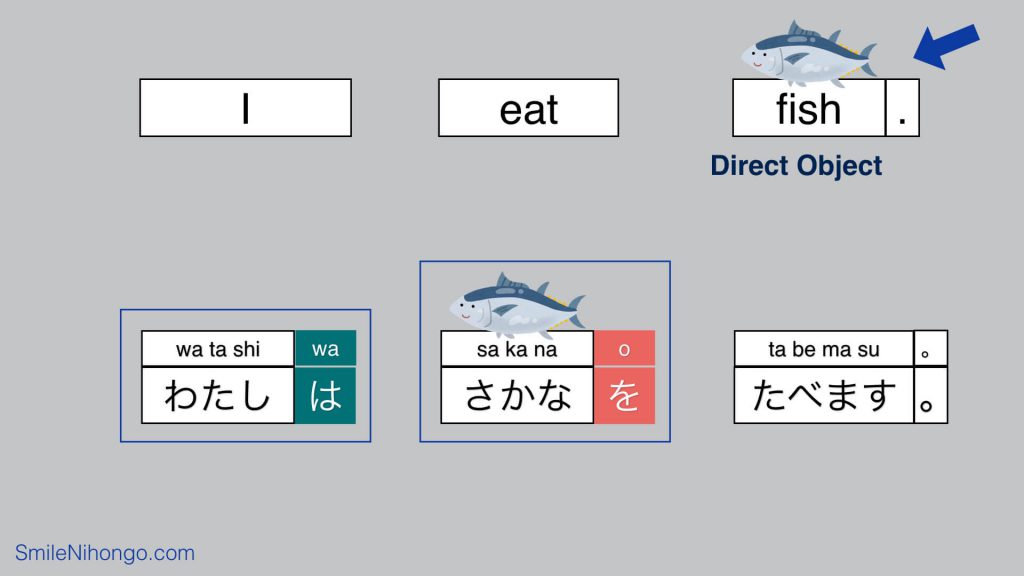 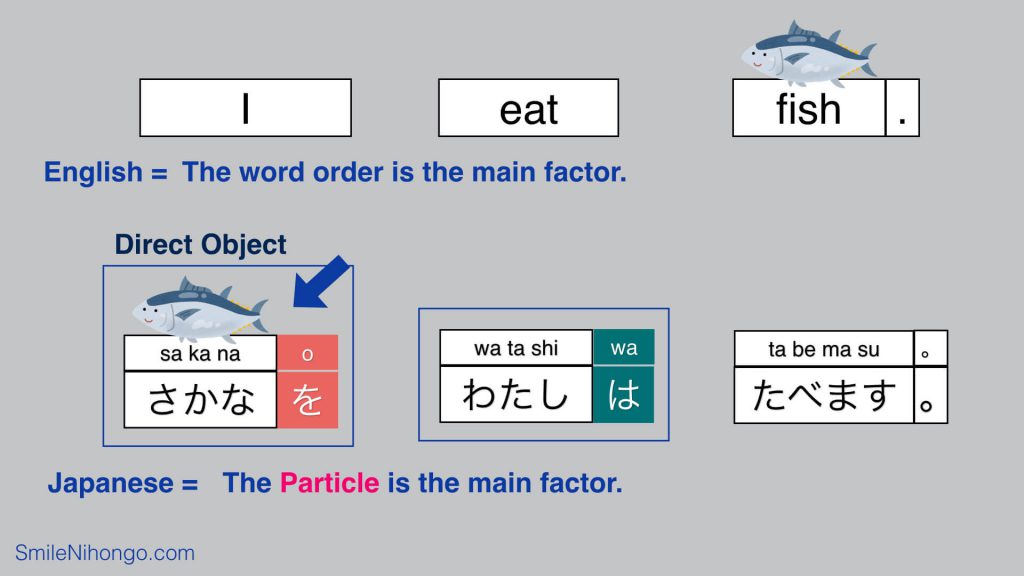 No, it doesn’t, in fact. The sentence still means I eat fish.

Why? Because the Particle O is still attached to the word sakana and indicating that the word is the Direct Object in the sentence.

This is why I said word order doesn’t matter much, but the Particles do in Japanese. As long as you attach the right Particles to the right word, there’s no need to sweat about what order you put those words in a sentence. You can put them in the order that you like.

Due to such characteristics of the language, the two sentences below mean exactly the same thing, I eat fish. Which way should you say it then? Well, it totally depends on your personal preference. 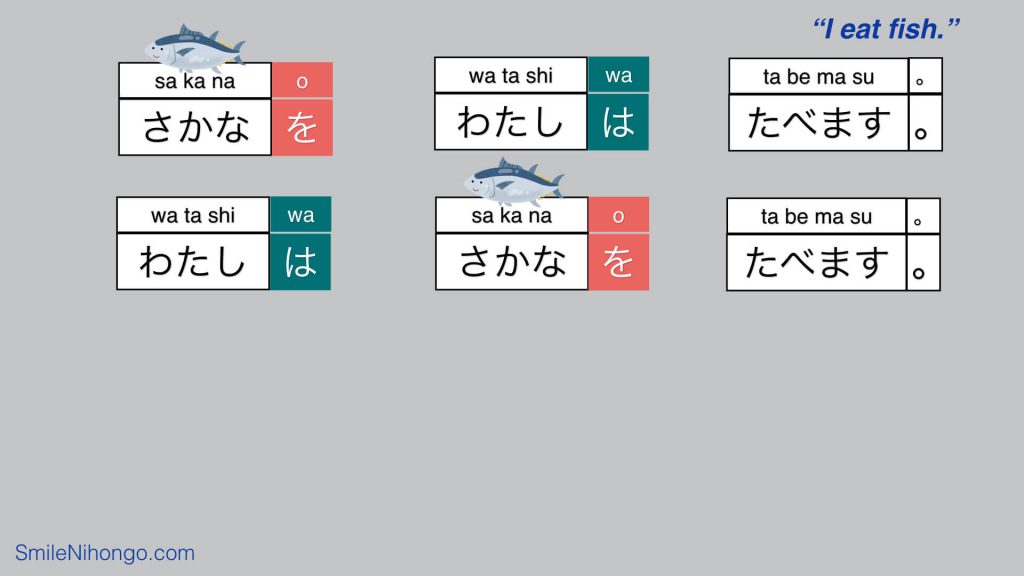 The same rule applies to a longer sentence like the one below. 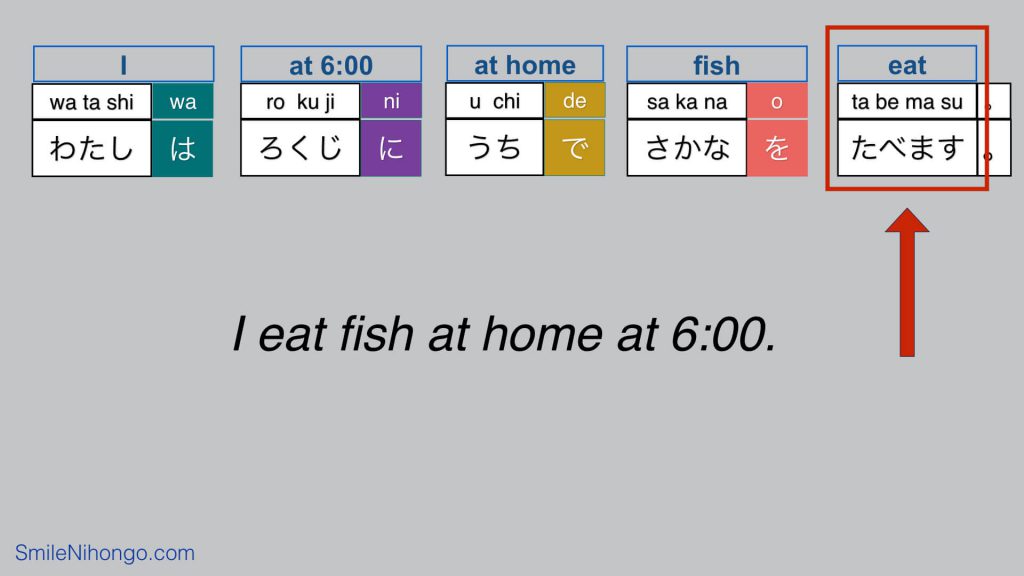 The sentence has five units in it. Each unit, except for the verb, has a word together with a Particle indicating how the word functions in the sentence. As long as you end this sentence with the verb tabemasu (eat), you shuffle the other four units. It doesn’t have to be in this particular order.

Mastering Japanese sentence structure means mastering Particles. We have so many Particles in our language that some even created a dictionary of them. However, you don’t have to master all of them from the beginning. Just familiarize yourself with the basic ones that are frequently used in simple conversations.

Leave me comments if you have any questions about Japanese sentence structure or Particles. Happy learning!