You are here: Home / Culture / Japanese Chopsticks Etiquette – 12 Things Not to Do

Do you know chopsticks etiquette? Although forks and spoons are widely used in Japan, chopsticks (箸 “hashi” in Japanese) are still the major utensil in the country. Therefore, knowing the proper etiquette is vital.

Japanese children start attempting to use chopsticks between 3 to 5 years old. As they grow up, they gradually learn how to hold them properly and use them according to correct etiquette. In this post, I share 12 taboos of chopsticks so that you won’t embarrass yourself or offend others unintentionally.

First of all, why don’t we test your knowledge? How much do you know about chopstick etiquette? Try the short video quiz here.

Now, let’s find out why those taboos are considered not good.

“kirai” means dislike and “bashi” is the voiced version of “hashi” which means chopsticks.

The following ways are the things you absolutely must avoid as they are considered extremely rude.

Sticking chopsticks into your rice is what we do when we offer rice to a person at his/her deathbed or to the deceased at the Buddhism/Shintoism alter in the house.

Thus, doing this in front of people alive is absolutely inappropriate. 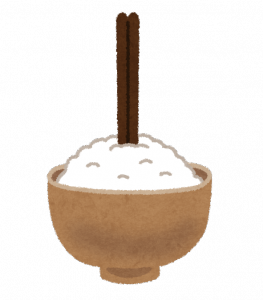 Transferring food from a pair of chopsticks to another is considered as an ominous act because it is related to a special ritual we perform at a funeral.

We have a tradition of cremation. After a body gets cremated, funeral attendants gather around the cremation table, pick up the bones one by one, pass them to the person standing next to you until they are placed in the urn.

Thus, it is an absolute No-No to do this with food. 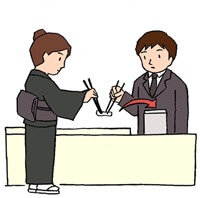 Spearing food with chopsticks, especially with one chopstick, is viewed impolite and rude to the person who prepared the dish.

It is true that there are round and slippery foods that are difficult to pick up with chopsticks, such as beans. I understand, but please try to avoid impaling food with chopsticks. It is way better to use a spoon instead if you truly struggle. 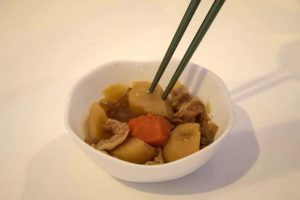 You are supposed to use chopsticks to gracefully deliver food from the dish to your mouth. Licking your chopsticks in front of others is viewed childish, unpleasant, and ill-mannered. To avoid pieces of food sticking to the tip of your chopsticks, start with soupy dishes, such as miso soup, so that the chopsticks don’t get dry.

In many cultures, pointing a finger at someone could be considered rude. In Japanese culture, pointing at someone with your chopsticks is also taboo. People view it extremely impolite and almost insulting. It could easily ruin trust and relationship in a business setting, so avoid doing it at any cost. 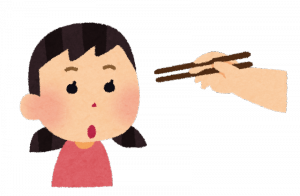 It is common to have many different dishes on the table for a meal in Japan. Letting your hand with chopsticks wander and hover over those dishes is a very bad manner. First, it prevents others from picking up things from dishes. Second, it gives the impression, especially to the cook, that you are not interested in any of the dishes (that’s why you can’t decide which one to pick right away) and even judging the food. 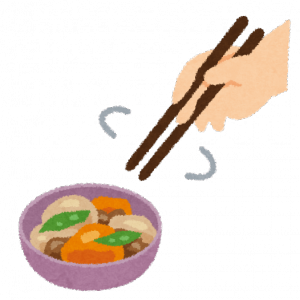 Things You Should Avoid

7. Pulling a bowl or dish with your chopsticks: 寄せ箸 (yose bashi)

You may have the temptation to pull a dish toward you with chopsticks because it’s far from your seat and you cannot reach. It could be commonly seen at the dinner table at home. However, it is considered to be a bad manner and you shouldn’t do it. In fact, it could be dangerous as the bowl or dish can be turned over and create a mess at the dinner table. 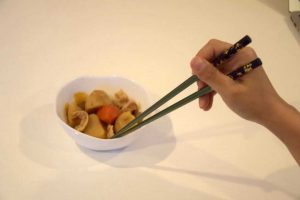 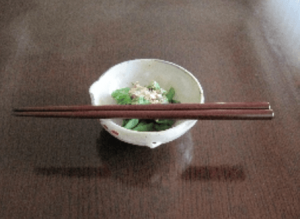 Be careful not to let soup or sauce drip from the tip of your chopsticks onto the table or on your clothes. This ill-manner is called namida bashi. “Namida” means tears in Japanese. The way liquid is dripping from chopsticks remind people of someone crying and hence, the name. It’s not only impolite but also gives people an unpleasant impression. 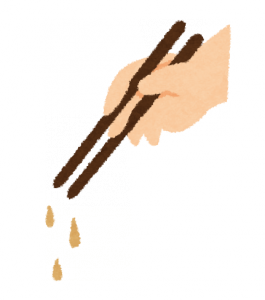 People view biting the tip of chopsticks and leaving tooth mark on them impolite and childish. Moreover, the act shortens the life of the chopsticks. You should avoid doing this especially when you are eating out and you do not own the pair of chopsticks. 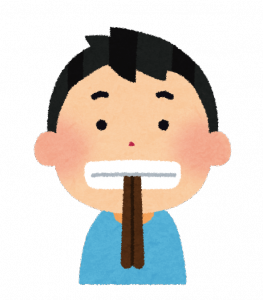 Your chopsticks are not drumsticks. Tapping or hitting a bowl or plate with them is not only annoying and discourteous but also damages the tableware. You may observe such behaviors at a drinking place where people are drunk and have lost control over their own behaviors. However, as an etiquette, it is a taboo and you should refrain from doing it.

12. Shoveling from your bowl into your mouth: かきこみ箸 (kakikomi bashi)

It is getting to be a more common behavior at home and could be forgivable among family members. You may sometimes see men shoveling rice into their mouths when they are in a hurry to finish their meal. Traditionally, however, it is considered to be unsophisticated and impolite. 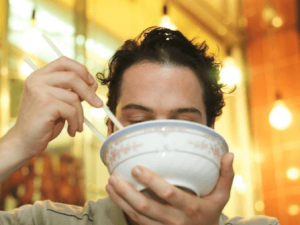 Chopsticks Etiquette is All About Caring

Chopsticks etiquette is all about refraining from behaviors that would make people around you feel uncomfortable. The fundamental rule here is to not be too self-occupied and to care for other people. They happen to be in the same space as you at the moment. Why not make the dining experience a pleasant and enjoyable one for everyone!

Do you want to learn more about Japanese culture? Try this quiz as well!

If chopsticks are the major utensil in your country, I would love to know how the etiquette in your culture is similar or different from Japan. Leave them below and share with the community!