You are here: Home / Grammar / What Japanese Verb Forms to Use – Conjugation Chart

Do you know what Japanese verb forms to use when you are speaking (or writing) in Japanese? As a grownup, 80-90% of the time when you are communicating you will need to use MASU form.

What is MASU form? That is the polite form of the verb that we use as we interact with others as an adult in Japanese society. Learn more about Japanese verb forms in this short video.

You can sing up for the free mini-course I mentioned in the video. Simply click the button below and it will take you to the free sign-up page. The Japanese Verb List (14 pages, PDF) is provided inside the course.

If you do not want to enroll in the mini-course but just want the Verb List, you can download from below. Let me know where I need to send it to you!

What Japanese Verb Forms to Use as an Adult

As you can see below, we have three different verb forms (Speech Styles) in Japanese that we differentiate depending on who we are speaking to. Native Japanese children first learn the Dictionary Form (Informal Speech) at home while they are very young. That is the speech style we use to converse with our family members. 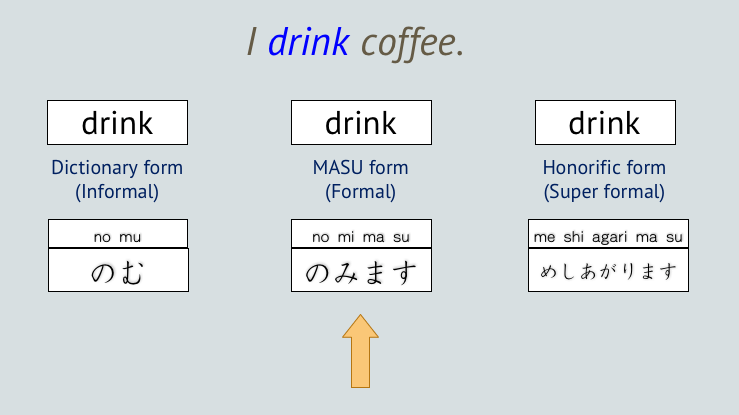 Then, once they started to communicate with people outside their family circle, they gradually learn to use Formal Speech. As they speak to neighbors, teachers at school, or parents of their friends, they realize they are not supposed to talk to those people as they talk to their own mother. They learn the need of shifting their speech level to formal speech.

To communicate in the formal speech, Japanese kids learn the proper Japanese verb forms (MASU form) little by little in their daily lives.

Honorific Form is used only when we mention other people’s actions (never our own) gracefully. If you stay at a hotel in Japan, the front desk clerk most likely uses this speech style to speak to you to show his/her respect towards you as a customer. Even native Japanese people do not start using this super formal speech style until they graduate from high school or college, and start working in the society. Some companies train their new-hires with Honorific Speech during the first few months of the employment.

In Japanese language classes since the students are no longer 5 to 6 years old, we teach MASU Form first. Many Japanese textbooks introduce MASU Form first too. We teach the learners Formal Speech first so that they won’t sound rude or childlike to speak to anyone in Japanese.

Believe it or not, Japanese verbs in Dictionary Form are way more difficult to conjugate than MASU Form. Japanese kids naturally master the complex rules of Japanese verbs as they interact and communicate with people on a daily basis.

How to Conjugate Japanese Verbs 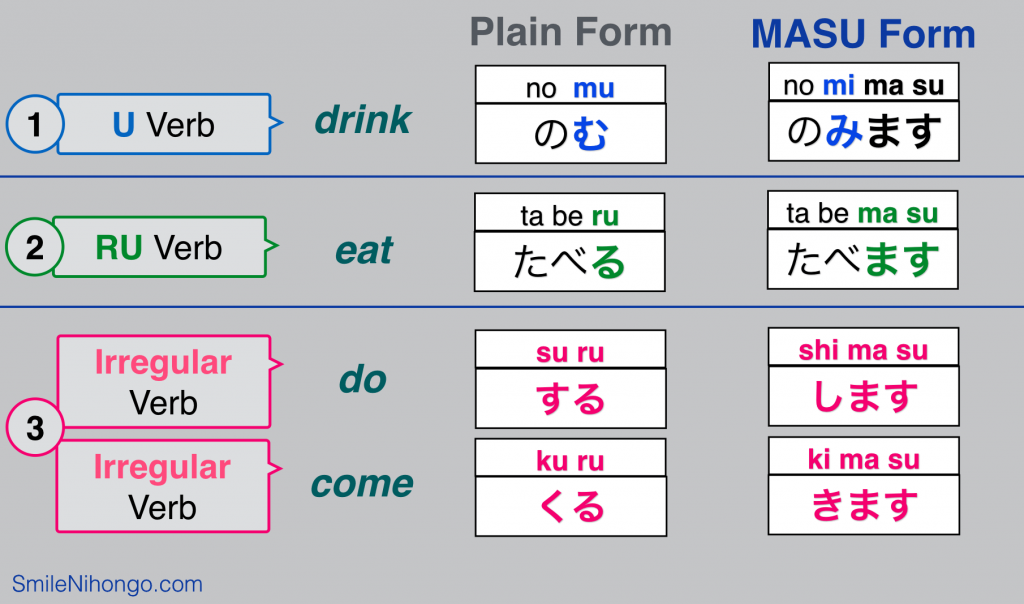 Japanese U Verbs in Dictionary (Plain) Form always has the vowel U at the end. Change that to the vowel I and add MASU to make the Masu Form. For instance, as you see in the example above, the Dictionary Form of “drink” ends in the sound MU. Change the MU to MI and add Masu to convert it to the MASU Form, which is のみます (NoMI masu).

Japanese RU Verbs are easy to conjugate. All the RU Verbs end in the sound RU in the Dictionary (Plain) Form. You simply need to replace the RU with MASU to convert them into MASU Form. In the example above, the Dictionary Form of “eat” is tabeRU. Change the RU to MASU and you have the MASU form of “eat” which is たべます (tabeMASU).

We have only TWO Irregular Verbs in Japanese. One is “DO” = SURU and the other is “COME” = KURU. They are named Irregular Verbs because there are no conjugation rules when it comes to these two verbs. You simply need to memorize their Dictionary (Plain) Forms and MASU Forms as presented above.

I hope this article helped you understand why you are not supposed to use Japanese verbs as you find in the dictionary or at Google Translate (unless you chose to speak in Informal Speech).

I have been teaching Japanese to English-speaking learners for many years. Since there are no speech levels that exist in the English language, it is one of the most difficult notions for my students to comprehend. Yet, it is a huge part of the Japanese language socio-linguistically.

We simply do not function well as a member of the society if we don’t use the proper speech level to a certain group of people. So, if your purpose is to actually use Japanese in real communications, try not to copy what you’ve heard in Japanese anime. (most likely, they use Informal Speech and not Polite Speech)

Join the mini-course where I walk you through the basics of Japanese verb forms and sentences.

Leave me comments below if you have any questions. Happy Learning! 裕子先生（ゆうこせんせい）Yuko-sensei