You are here: Home / Grammar / “When” in Japanese – Is it correct to say いつに Itsu NI?

Let’s learn how to ask when in Japanese. The question word “When?” is いつ Itsu. To ask when is it? you can simply add ですか desu ka after いつ Itsu and ask as below. 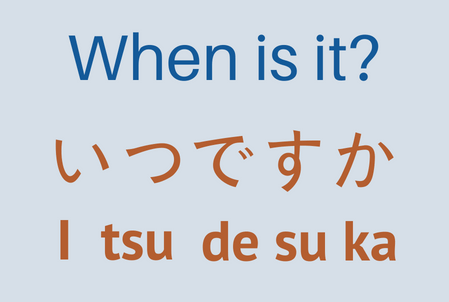 However, if you want to ask a question such as “When will you go to Japan?” things are not going to be as simple as asking where is it because you will have a verb (“go”) in your question.  This lesson explains how to use the question word “when” in Japanese with a verb in your questions.

Do We Need a Particle?

When you are asking questions like when do you, when will you, or when did you, the information you are asking for is the time. Right? So, it seems to be natural to mark ITSU いつ with the time marker NI に. However, that is not the case here.

And the reason why we don’t do it is this. There are so many time expressions in Japanese that do NOT take the time marker NI に, such as today, tomorrow, yesterday, last week, every month, or next year. So, to make it possible to include all kinds of time expressions in the response to the question ITSU いつ, this question word has to be free from the Time Marker NI に.

How to Ask When in Japanese

Let’s try to use the question word When in Japanese in this question. When will you go to Japan?

There are four steps you need to keep in mind when you convert an English sentence like this into Japanese.

Step 1: Change Each Unit into Japanese

These are the three units that we need in Japanese. When is いつ ITSU, “go” is いきます IKIMASU, and Japan is にほん NIHON.

Step 2: Place the Verb at the End

Next, we need to place the verb “go” いきますIKIMASU at the end of the sentence with the question particle か since it’s a question. 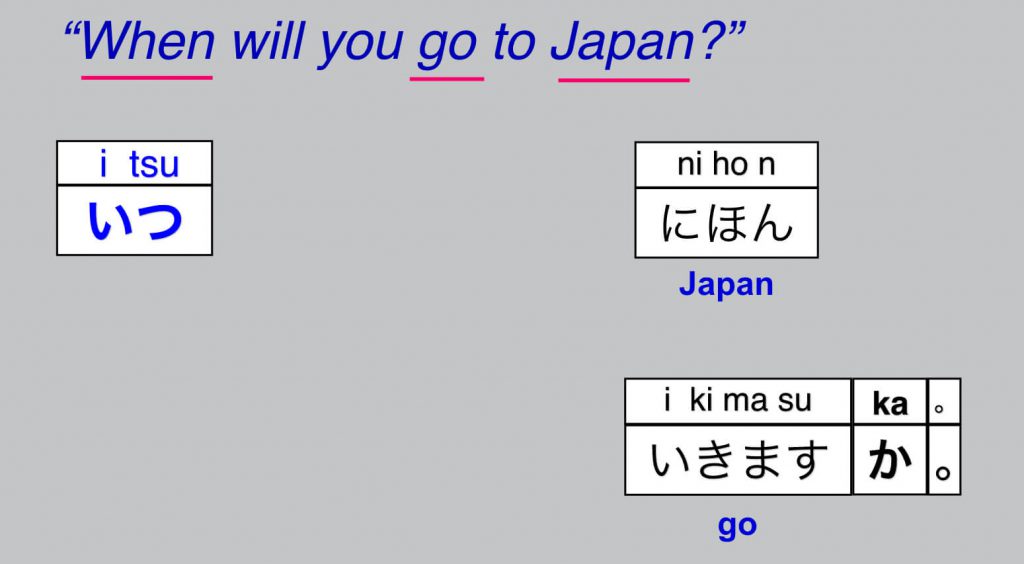 Step 3: Mark Other Units with a Particle (If Necessary)

いつ ITSU doesn’t require a particle as we have discussed, so we are not going to mark it with any particle. The word “Japan” is a destination in this particular question because of the verb “go”, so we have to mark it with the destination marker に NI.

Now, all the units are properly marked with a particle. We can place them in the order that we like. We can keep the wording as in the image above, or if we want, we can switch the first two units as below too. They don’t have to be in one particular order and mean exactly the same. “When will you go to Japan?”

So, When will you go to Japan or When are you going to Japan is either:

How to Answer When in Japanese

Now, let’s dive into how to answer this question. Let’s say your response to this question is this. I will go in August.

I will Go in August

August in Japanese is はちがつ HACHIGATSU, and since it is the name of a specific month, we have to mark it with the time marker に NI. And after that, you simply conclude your response with the verb いきます IKIMASU. That’s it. There you have it. I will go in August is はちがつにいきます Hachigatsu NI Ikimasu.

Like this, although the word When in Japanese never takes a particle, you need to use the Time Marker に NI depending on the time expression in your response.

I will Go Next Year

Another example. If you want to respond to the question this way: I will go next year.

Now you have to say “next year” in Japanese which is らいねん RAINEN. Since RAINEN is a relative time expression, we don’t mark it with the time marker に NI.  Leave it as is, and say 行きます IKIMASU to conclude the response.

So, “I will go next year” in Japanese is らいねん いきます RAINEN IKIMASU.

When you use a question word in your sentence, the choice of a particle to mark the word is crucial. However, it is not the case with When in Japanese as long as you use it with a verb in your question. Again, the word “when” is free from the time marker に NI regardless of the verb you use.

Do you want to try a free mini-course about Japanese Verbs & Particles? You can sign up with your name and email address.

The course comes with a 14-page list of Japanese Verbs.

Hope this mini-lesson was helpful for you to understand how to use WHEN in Japanese. Leave me a comment if you have any questions. では、また！