Let’s learn how to say WHERE in Japanese and how to use it with a verb in your question. “Where?” in Japanese is どこ DOKO, so to simply ask where is it? you can just add ですか desu ka after DOKO. 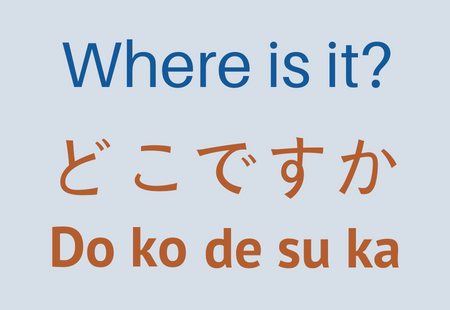 For example, to ask “Where is the restroom?” we phrase it “As for the restroom, where is it?” in Japanese and go like this.

However, if you want to ask “Where do you usually buy your lunch?” things are not going to be that simple because you will have a verb (“buy”) in your question.  This lesson explains what particle you need to add to DOKO depending on the verb you have in the question.

What is crucial here is the particle. To ask Where will you? Where do you? or Where did you? you need to figure out what Particle you need to mark どこDoko.

Mainly, the Particle you will need is either one of these:  で DE or に NI.

You need to figure out if you want to ask “where at” or “where to” depending on the verb you have in the question. Let me explain with some examples.

During the lunchtime at work, your co-worker is eating his lunch at his desk. It looks really good. You are curious to find out where he got his lunch and ask “Where did you buy (your) lunch?”

In this case, the verb you have in the question is “buy.” Are we asking Where at? OR Where to?

We are asking Where at, right? So, in this sentence, we need to mark the question word どこ Doko with the Particle で DE and say どこで Doko DE.

After that, you can say lunch in Japanese, which is ひるごはん Hirugohan or ランチ Ranchi with the Direct Object Marker を O.

Where did you buy lunch?

On a side note, you can switch the locations of どこで Doko DE and ひるごはんを Hirugohan if you want.

As long as each unit is set up correctly with the right word and right particle, the word order doesn’t matter much in Japanese. It is a matter of personal preference and doesn’t change the meaning of the sentence whatsoever.

Case 2: “Where did you go yesterday?”

Let’s take a look at another example. On Monday at work, you are chatting with a co-worker who says he went out yesterday and had a great time. So, you ask “Oh, where did you go yesterday?”

Now, the verb you have in the question is “go.” Are we asking Where at? OR Where to?

This time, we are asking Where to, right? So, we need to mark the question word どこ Doko with the Particle に NI and say どこに Doko NI.

The most crucial part is done. Now we simply need to add the Time Expression “yesterday” to the sentence, which is きのう Kinoo. This particular time expression is a Relative Time Expression, so we don’t need to mark it with the Time Marker に NI.

At the end of the sentence, we place the verb “went” which is いきました Ikimashita with the Question Particle か KA. That’s it. Now the question is complete.

Where did you go yesterday?

Of course, if you wish, you can switch the locations of きのう Kinoo and どこに Doko NI, and the question still means the same.

How to Use Where in Japanese

The video below is a lesson about どこで Doko DE and どこに Doko NI. I explain things more in detail in the lesson video so it should help you deepen your understanding of how to use the question word Where in Japanese.

Do you want to try a free mini-course about Japanese Verbs & Particles? You can sign up with your name and email address.

Inside the course, you can download the list of Japanese verbs. It is a 14-page PDF material and comes in both Romaji & Hiragana. Each verb is listed with its meaning, dictionary form, Masu form, and Masu form in the past tense.

Leave me a comment below if you have any questions. Happy learning!