You are here: Home / Hiragana / How to Write Japanese Hiragana T Group – たちつてと

Konnichiwa! Today we are going to learn how to write Japanese Hiragana T Group – た、ち、つ、て、と. 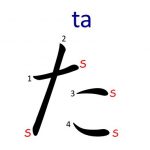 た has four strokes and the last two strokes look like the letter KO こ. Make sure to place those two strokes between the stroke #1 and the bottom line.

The pronunciation of た is a combination of [t] and the vowel [a].

The Japanese [t] sound is produced by touching the upper teeth and gum with the tip of the tongue. It is not as strong as the English [t] sound as less air is forced between the teeth. The pronunciation of [ta] is similar to the [ta] as in the word “taco”. 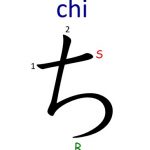 ち has two strokes and the second one has to go slightly diagonally. At the tip, release your pen before it gets the turning point of the diagonal line.

The letter ち is pronounced as [chi], and not [ti]. The sound [ti] is not a native sound to Japanese, although younger generations have no problem pronouncing [ti] in loan words nowadays. The [ti] is often replaced with [chi]. This is why Japanese people pronounce the English word “team” as [chiimu].

The pronunciation of ち is [chi] as in “cheese” in English. 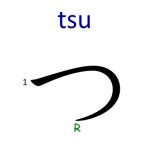 つ has only one stroke and is a very simple looking letter.

Just remember to keep it rather flat as explained in the video. Also, you have to end the stroke half the way going back to the beginning point.

The pronunciation [tsu] is similar to the sound of [t’s] in “cat’s.” The letter actually looks like a tail of a cat, so you may want to remember it as “Tsu is a cat’s tail.” 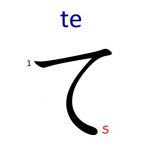 て has only one stroke too, just like つ.

Try to place the round curvy part right below the middle point of the first part of the stroke.   remember to keep it rather flat as explained in the video. Also, you have to end the stroke half the way going back to the beginning point.

Japanese [te] sounds a little more gentle compared to [te] in English as less air is forced out as you pronounce it. The pronunciation is similar to the first syllable of “table” without the [y] sound. 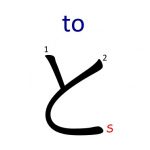 と has two strokes. Although this is a quite simple looking letter, I often find my students struggle with balancing と nicely.

The letter looks like a toe with a thorn stick to it. Check if both the first and second strokes start from almost the same height. Level the ending part of the second stroke.

The pronunciation of と is similar to the English word “toe” but the [t] sound is shorter.

How to Spell “D” Sounds

In the previous Hiragana lessons, we have learned that by adding 濁点（だくてん）”dakuten”, or in more common term てんてん “ten ten,” you can spell voiced sounds in Japanese. Thur far, we have covered how to spell [G] sounds and [Z] sounds.

All you have to do is to add the “voiced sound markers” てんてん “ten ten” to the upper right corner of each letter. See below.

Did you notice that there are two identical sounds that we saw in the [Z] group? Yes, they are ぢ [ji] and づ [dzu] sounds.

It is a matter of spelling, and there is no way to figure out which one to use.

Just like in English, “their” and “there” share the same pronunciation but the meanings are different. You have to know and remember how to spell it correctly to convey the meaning you intended. It’s the same in Japanese.

Having said that, I would say 80% of Japanese words that have a [ji] sound takes じ instead of ぢ. In the same manner, many words take ず [dzu] but not づ [dzu] in its spelling. 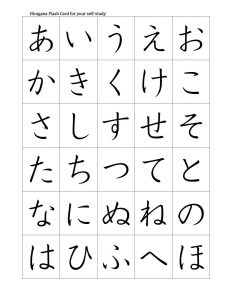 I hope you had fun learning how to write Japanese Hiragana T group たちつてと as well as だぢづでど.

Can you believe this is lesson 4 in this Hiragana series and you have already studied 36 letters. Great job!

I am still in search of a good flashcard app to introduce you so that you can practice memorizing Hiragana letters on your phone. Meanwhile, I’ve decided to provide you paper flash cards that you can download and print out. Who knows, some people may prefer things in the old way, right?  😉

Type in your name (nickname is fine) and email address in the box below and I will send you the flashcards. By the way, you’ll still need to cut them out by yourself to use them as flashcards, just so you know!